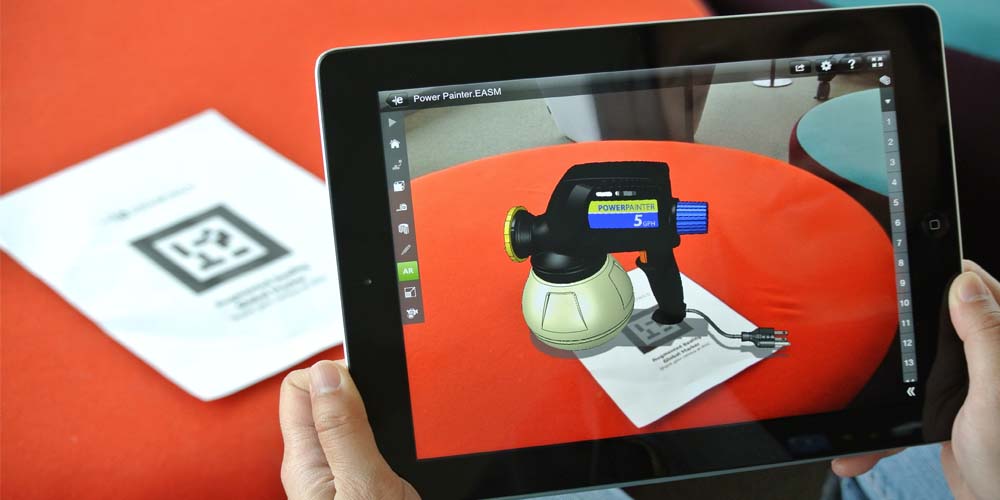 At RJ Design, Curiousity leads to Innovation, And Desire Drives Creation. But sometimes, the world is not enough to fulfil the desire to innovate. Thus, we love to incorporate and discover the vastness of the digital world in our work, through Augmented Reality.

What is Augmented Reality?
Augmented reality (AR) is a live direct or indirect view of a physical, real-world environment whose elements are augmented (or supplemented) by computer-generated sensory input such as sound, video, graphics or GPS data. It is related to a more general concept called mediated reality, in which a view of reality is modified (possibly even diminished rather than augmented) by a computer. As a result, the technology functions by enhancing one's current perception of reality.[1] By contrast, virtual reality replaces the real world with a simulated one.[2][3] Augmentation is conventionally in real-time and in semantic context with environmental elements, such as sports scores on TV during a match. With the help of advanced AR technology (e.g. adding computer vision and object recognition) the information about the surrounding real world of the user becomes interactive and digitally manipulable. Artificial information about the environment and its objects can be overlaid on the real world.

"Physical objects are often static and dumb, offering little interactivity to the curious observer. Which is why the potential of augmented reality (AR) - virtual enhancement of the physical - is getting business excited."

Why is it different from Virtual Reality?
The difference between the two is that virtual reality enables a person to explore and interact within a three dimensional environment. Whereas augmented reality blurs the boundary between real and virtual worlds but always with the aim of enhancing reality - hence the term ‘augmented reality'.

Augmented Reality: The future of Advertising?
Passengers at a bus stop in London recently got more than they had bargained for when they were plunged into a world of science fiction thanks to augmented reality advertising. After one woman was scared out of her seat by a crashing meteor, it was another passenger's turn to be terrified by a tentacled monster trying to grab passers-by.
"We are immersed in advertisement from morning to evening. We interact with about 10,000 brands each day… 10,000 – that's a huge number!,” says advertising and marketing professor Julien Intartaglia. "Which means that to stand out from this flood of brands in people's everyday life, we have to be creative, resourceful in order to attract consumers' interest and make them relate to the product."
"If I am immersed in an unprecedented kind of consumer experience, I will share it with other people, and by doing this, I will raise other people's interest, and that's what's interesting because it's a new kind of advertising model which allows brands to play with the client's involvement,” says Professor Intartagli.
It's certainly an attractive advertising model, which has drawn interest from a wide range of brands, hoping to create a buzz and raise consumer attention.
One of them is major Swiss telecom company Swisscom. "We have launched operations for several clients, for example advertising campaigns in magazines where we increase the content by adding videos, games, which may be of interest to the consumer and will extend their consumer experience. For a publisher, it's also a chance to enrich the print edition of a magazine because, as we all know, unfortunately, sales in print editions are declining," says Swisscom consultant Thierry Kunstmann.
While it's still in its infancy, augmented reality advertising has a promising future, with consumers of every generation drawn to its unexpected blurring of the line between the real and virtual worlds.
A blurring that allows advertisers to transcend the public sphere and enter potential customers' own, private world, allowing them to take part in and become the stars of this new form of reality show.
Source: Wiki, Euronews.com,BBC.com